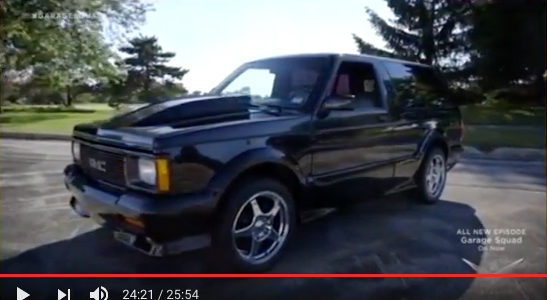 Velocity Channel features a series named “Garage Squad” in which the hosts rescue weekend mechanics who perhaps lack the time, resources or simple know-how to get their “project” autos road-worthy again. National Hot Rod Association world champion driver Bruno Massel, co-host Heather Storm and lead mechanic Joe Zolper bring expertise, parts and tools as they crash the garages of amateurs who are in over their heads under the hood. After working alongside the owners to ensure the perfect vehicular vision, the squad returns the completed cars for an emotional reuniting of man and machine.

On Season 3, Episode 7, the Garage Squad crew featured a 1993 GMC Typhoon that was in dire need of repair. Due to the location of the truck and the story given in the episode, it is presumed this truck was one of the many vehicles that fell victim to Rockford Racecraft – a popular Chicago based SyTy performance shop many years ago – that took trucks in, collected money from owners and let trucks sit for years without being completed. Rockford Racecraft has since closed it’s doors permanently after lawsuits caught up with the owner.

The Typhoon isn’t exactly stock with a bowtie block with forged internals, air to air intercooler, and Big Stuff 3. During the show, they add a bigger throttle body, exhaust, and fixed a cracked frame to name a few things. They also got rid of the curbed stock rims and upgraded to chrome ZR1s.

Now we get it, the episode is a bit cheesy…..sorry, REALLY cheesy….and leaves many gaps in the details of the build and repairs, but this series (as well as many others on Velocity) is meant for 30 minutes of beer induced entertainment on TV. We have to shake our head and laugh with the NO2 mod for the “extra 150hp” as Heather explains to the cameras. What we do love is that the show took the time to tackle a project truck and that there is now another Typhoon back on the streets being enjoyed by its owner.