diecast5 GMC17 gmc truck1 johnny lightning2 marlboro3 marlboro syclone1 Sonoma GT9 Syclone29 syty3 Typhoon25 white lightning1
SyTy owners, like most any other car enthusiasts like to collect anything SyTySoGT related.  The more, the better.  For many years now, the best...

SyTy owners, like most any other car enthusiasts like to collect anything SyTySoGT related.  The more, the better.  For many years now, the best representation in diecasts has been from Johnny Lightning and their various colorways and interesting releases in both the Syclone and Typhoon.

The end of 2018 brought in another release from Johnny Lightning with their latest version of the GMC Syclone in both the standard black format and and a “tribute to a ’92 Race Contest grand prize vehicle”….or, the more familiar known name in the SyTy world, the Marlboro Syclone. No need to go into detail why it wasnt labeled or marketed as the Marlboro Syclone as it’s obvious that licensing and endorsing smoking isnt something that Johnny Lightning probably wanted to tackle. Even better is that JL for whatever reason decided to do a color reverse on the Marlboro and do a white truck with red decal version. It could be possible they came across pictures of a real Syclone that was done in reverse Marlboro colors and decided it was cool enough to do one themselves. Either way and for whatever reason, we are excited for this release!

Like most JL releases, there are some A and B versions along with some White Lightning editions….as well as variances in packaging.  In short, this Syclone release has 6 total versions to collect.

Lets break it down:

There are 2 different package backings. The first to come on the market was the Xtreme 90s Muscle packing. A nod to the 90s is shown with bright aqua teal, pink, and neon green colors with a stock GM promotional picture of the Syclone is used. The cardstock gives a bit of quick info called “Muscle Facts” on the left side along with a color swatch of the packaged truck. There are 3 colors offered in this release – the standard black/black Syclone, the red Marlboro, and a White Lightning Marlboro in which the body color is white, the cladding black and the rims are gold with white tires.  There is a Version A and Version B for the White Lightning which can be easily deciphered in the lower left corner of the cardstock. All the trucks feature a gray dashboard with black interior. 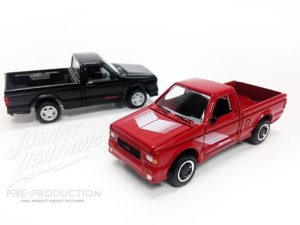 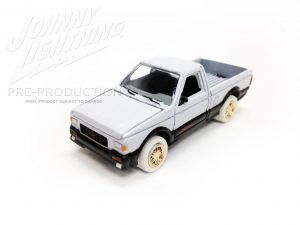 The other packaging is a Hobby Exclusive (i.e. not sold in retail stores and only available through your JL dealers) and has a GMC logo on it with mostly red colors on the cardstock. The same stock GM promotional Syclone picture is used again for the background. This is the reverse Marlboro Syclone which is white with red decals. Again, there is “Muscle Facts” written on the left side of the cardstock in which they noted the reversed colors. The interior is all red in color as well unlike the dual color of the Xtreme 90s Muscle cardstock. There is also a White Lightning version of this series that has the same body color (white with red decals), gold rims, white tires, but the interior is all white as well. 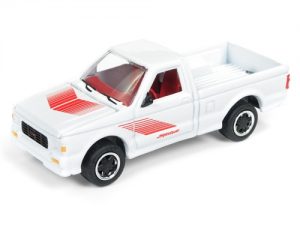 The one downfall that we saw immediately was that Chevy Xtreme style rims where used for this release. This is a bit disappointing to us knowing that JL could have done stock style SyTy rims like they did on previous Typhoon releases.  The engine detail seems to be the same of previous releases, not really exactly looking perfectly like the 4.3 turbo V6 we all know and love, but we understand the limitations on how far you can go in detailing a diecast. We’ll call it a semi close representation.

Overall, this is some of the best looking of the JL Syclones as far as packaging looks and graphics used. Seeing the Marlboro done in 1:64 is exciting and is a great tribute to the 10 real Marlboro Syclones that are sought after by many.

The Xtreme 90s Muscle release can be found in your typical retail stores that carry JL and the other top diecast brands. The reverse Marlboro edition is hobby exclusive, so you wont see this hanging in the stores but rather available through online stores and private retailers. If you rather skip the hunt altogether and be able to buy them all, we highly suggest our friends at Surplus Goodies. Not only do they carry all the latest JL SyTy releases, but everything else that JL comes out with also….plus, the owner is a SyTy owner himself!

Of course, if you want to collect every single release, check out this thread on the forum that lists each JL Syclone and Typhoon release to date. This is an incomplete list at the moment with some minor errors, but it is currently the best list available to begin your quest to collect all of the JL SyTy diecasts!