Carlisle5 Event1 SyTy Meet3 SyTys@Carlisle2 SyTys@Carlisle20171 SyTys@Crarlisle20181
Each year in the small town of Carlisle, Pennsylvania a storm begins to brew with the gathering of the Syclones and Typhoons. Of course,... 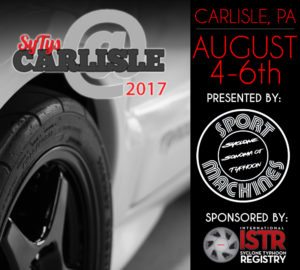 Each year in the small town of Carlisle, Pennsylvania a storm begins to brew with the gathering of the Syclones and Typhoons. Of course, this is a much welcomed storm as trucks from across the country get together and hold the annual SyTys@Carlisle event during the Truck Nationals, put on by Carlisle Events. The SyTySoGT portion of the show is hosted each year by Sportmachines with the newly formed ISTR acting as a marquee sponsor for 2017.

Owners descended into Carlise both driving and trailering their trucks which ranged from local regions and as far away from places like Florida and Canada.  Of course, with any SyTySoGT gathering you can count on mishaps and interesting stories on the trip to Carlisle, some which included things such as broken front differentials and sleeping on the side of the road, starter problems, and ignition demons to name a few. None the less, no one was left stranded and all who had issues made it safely to the event.

Located in Building Y at the Carlisle Fairgrounds, Tom Mandrov (owner of Sportmachines) and his team meticulously set up various examples of trucks that spanned from the 4.3 SS Syclone prototype, pristine Sonoma GTs, Typhoons with over the top paint jobs and modifications, and prime examples of Syclones that were stock as well as head spinning ridiculous horsepower LS swaps. Amidst these trucks, the Sportmachines booth is set up with tables of endless aftermarket parts, shirts, collector memorabilia, and more. Outside, the line of trucks don’t end with rows of parked trucks gleaming in the sun. Hoods are up and owners are passionately talking about their trucks, future mods, or listening to advice for questions they have.  Under the outside tent you find Dennis Harmon with his famed tiki bar mixing his signature drink the “Harmon Bomb”, a pool to cool off in, and sofas (of the blow-up variety) to sit and relax as you try to convince yourself that the surroundings you see are truly real. Food and snacks float around, while bean bags go whizzing by as a few people play a round of cornhole. Yes, SyTys@Carlisle has become the mecca of all SyTySoGT meets. 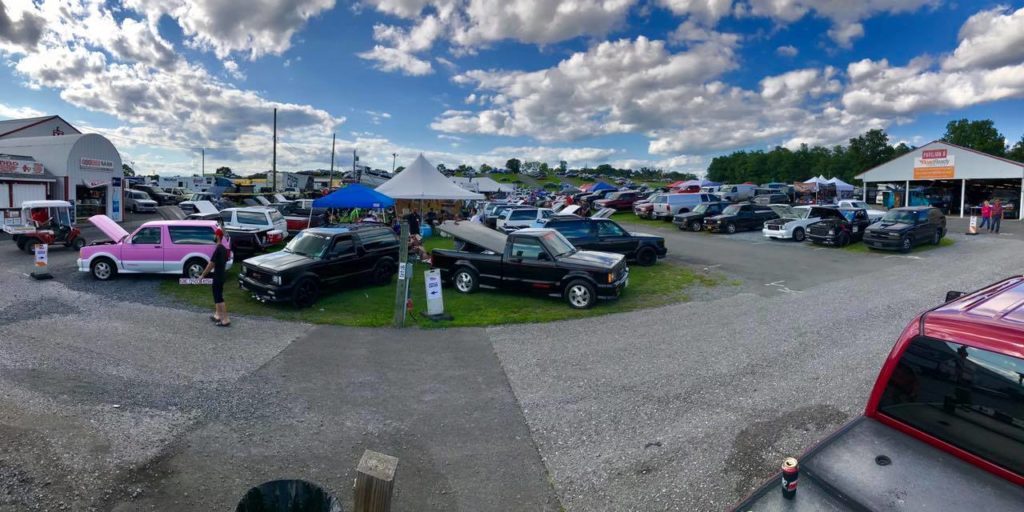 After Friday’s full day kickoff of the event, Cadillac Buick GMC of Carlisle owned by Conrad Aschenbach invited and hosted our group to the dealership for a delicious BBQ meal and perfect hideout while a downpour of rain passed through. After dinner, the fun continues when the sun goes down back at the hotel with what seems like another impromptu SyTySoGT show in the parking lot and everyone engaging into truck related discussions or stories. This year, the hotel pool was a refreshing getaway after spending the day in the Carlisle heat. A selection of roasted hotdogs or marshmallows to snack on was available if you followed the scent of campfire to the back of the parking lot where the Lindner’s had set up their hangout.

Saturday brought another full day of SyTySoGT craziness with crowds of people walking through Building Y and throughout the parking lot area. Shenanigans ran through the group as blue painters tape seems to appear in the form of hash stripes on various trucks…or if you were Canadian, in the form of “Eh?” was written on your truck.

After another day of fun, a SyTySoGT convoy was set up and the group headed to Appalachian Brew Company for some much needed food and adult beverages. Before grub, the trucks were lined up and an uncountable amount of pictures were taken.  ISTR conducted it’s 50/50 drawing with a $400 claim and congrats going to Scott Cherico. This year brought on something new with the Icarus-54 award in honor of Jack Staples who passed away in 2015 and was an avid enthusiast and dear friend to the community with his insight and stories he shared. This award was made to be given to someone who exemplifies a true passion in the SyTySoGT community the way Jack always did. This years award was presented to Ian Bockesh and Andrea Foster. Ian and Andrea’s devotion to the community with building his truck, representing at car shows and events – he recently was featured on RoadKill at one of their Zip-Tie Drag events –  and unending support to help others with questions or provide information when they are able proved they were the right choice for the Icarus Award. 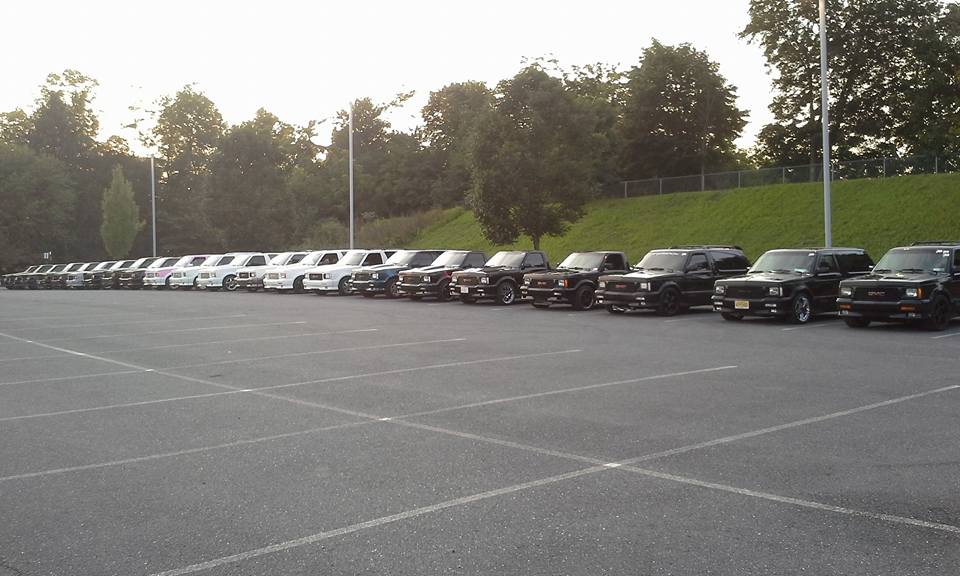 Sunday was the last day of the event, and mostly was a day of good-byes and safe journeys back home.

This years event hit record numbers seeing the most trucks in attendance since its introduction in 2014 with a total of 55 trucks registered and on sight. From the perfect stock examples to the over the top extreme builds, SyTys@Carlisle has become the largest gathering of Syclone, Typhoon and Sonoma GT trucks in the country.

A special thank you to Tom, Caroline, and the rest of the Sportmachines crew for their continued effort to ensure or presence each year is made at Carlisle. We would also like to thank those who attended and supported ISTR at this years event and those who helped contribute to making it memorable.

Next years dates have already been announced and planning has already begun. Next years SyTys@Carlisle 2018 will occur on August 3-5th. Our goal is to bring 75+ trucks. We urge everyone to make plans now for 2018 and help continue to support this event and help to expand it larger each year. Your attendance even without a truck does make a difference, make preparations now!  You can find more information both on this site, the ISTR forum, and on the official facebook page for the 2018 event information.

Visit the ISTR Store to become a member today!