Car Fix2 Florida3 Keith Gill1 Syclone29 TV2 Velocity Channel2 vortec1
Car Fix is a show on Velocity TV hosted by Lou Santiago and Jared Zimmerman. The premise of the show is to fix and restore vehicles... 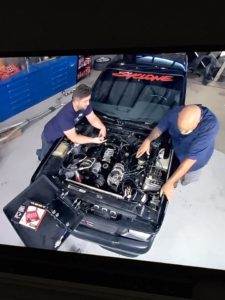 Car Fix is a show on Velocity TV hosted by Lou Santiago and Jared Zimmerman. The premise of the show is to fix and restore vehicles from the classics to modern day vehicles.

In Season 5, Episode 13, Car Fix is working on a GMC Syclone owned by Keith Gill from the Florida Association of Syclones and Typhoons (FAST). Due to Car Fix being filmed in Florida and Keith living within close distance of their location, it was an easy task to have it featured on the show.

Keith’s truck had been dormant for quite some time now (he also owns a Typhoon which he drives on a regular basis) in the midst of doing a vortec head swap. Featuring the truck on Car Fix was a perfect opportunity for the truck to be finished and be showcased on TV. With the parts supplied by Keith, hosts Lou and Jared did get the truck running and at the end of the episode were able to do a small boost launch.  According to Keith, the truck isn’t 100% done or running perfect – remember, this is TV magic to do these episodes, but none the less he’s happy that it now at least runs again giving him an opportunity and the motivation to finish it.

The episode has yet to be added to the Car Fix website, however Velocity has been replaying it quite often. As soon as there is a permanent link to feature the video here, you will just have to check your local TV schedule on Velocity on the next airing.