A few days ago, Robert “Mr. Syclone” had posted some videos and pictures of his testing and tuning to prep for his race season. All seemed to be going well and most certainly it looked like Robert was on his way to smashing some of his current standing records.

Unfortunately, Robert has made an update with results none of us like to see. During a test and tune on the track, the motor let go and took the trans with it. What started out in the video as a very healthy and strong run turns into disaster and you could hear the crunching noise of engine parts mid track and watching as Robert scramble to kill power. The damage was already done. The ending portion of the video shows mangled pistons, broken rods, a snapped crank and a badly cracked trans bell housing. 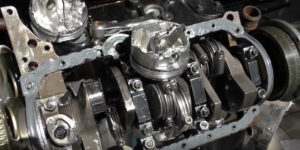 While we know this is a setback for Mr. Syclone, we have no doubt that he will be back and ready to go in a short amount of time. We can’t wait to see what new things Robert might bring to the table on the next go around and wish him luck on his continued reign of fastest AWD V6 in the world!

In true form as some already suspected, Mr. Syclone basically took no time at all to be back up and running after what seems to be a minor setback (for him) when his rods failed, splitting the crank in 2 pieces making the block a paperweight and putting a serious crack into his trans housing.

Robert posted this video on March 15 of both the destroyed engine and his truck idling at the same time. A thumbs up signifies that all is well and he’s back in action.