With the launch of the GMC Syclone in 1991, a promotional event was created, planned and facilitated by Vista Group in coordination with GMC...

The Syclone Challenge was part of traveling road show which was a marketing strategy for GMC dealers to showcase new truck models along with a selection of show trucks which included the famed 1989/90 Syclone LSR (Land Speed Record) truck.  Attendees to the show could see up close the latest in GMC Trucks along with go home with various GMC Truck Motorsports literature, posters, and apparel. The display traveled the National Hot Rod Association (NHRA) tour and allowed local GMC Truck dealer groups to showcase the new GMC Syclone pickup truck in an optimal high-performance setting – the quarter mile track.

The local dealer group would select prospective area customers to be invited to their local NHRA track and have a chance to participate in the Syclone Challenge. The pre-event briefing would be conducted by a NHRA staff member, giving prospects detailed instructions on how to pre-stage, stage, and then react to the “Christmas Tree” to obtain to lowest ET (elapsed time) at the far end of the quarter mile. 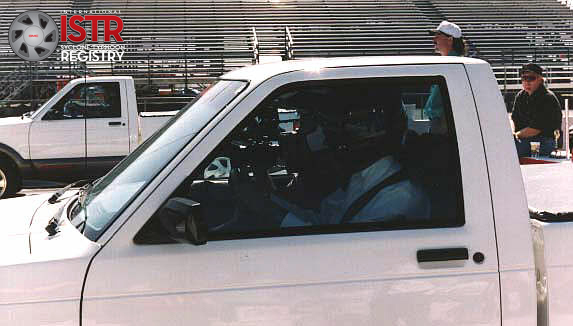 Participants pre-staging on the track for their chance to win and race against “The Snake”.

Throughout the afternoon, participants would be eliminated in a bracket-racing fashion, with the winner of each heat proceeding to the next round. The final event winner was then given a NHRA Sunday All-Access credential, and then lined up to race famed racer Don “The Snake” Prudhomme in the during the pre-race ceremonies, in front of a standing room only crowd. 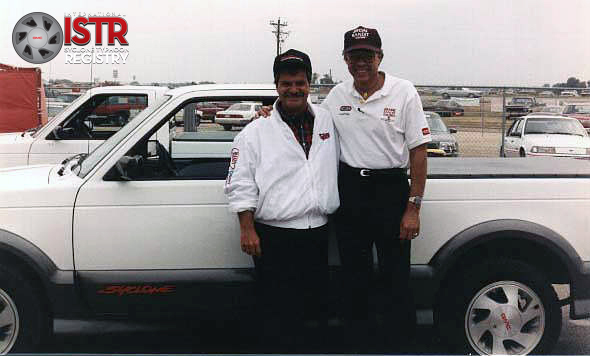 Don “The Snake” Prudhomme (right) and participant winner pose for a photograph.

Of course, Don being a seasoned NHRA driver had the skill and driving experience to launch the Syclone down the strip and thus giving every participant who was lucky enough to go heads up with the legend racer a true “challenge” to beat him across the beams at the end of the strip. 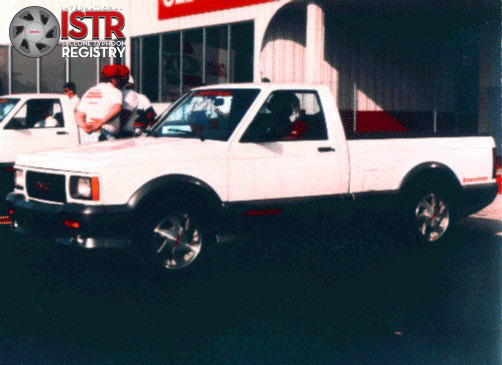 Don “The Snake” Prudhomme prepares himself for another head to head race challenge.

The Nashville Network television show, Truckin’ USA, featured the Syclone Challenge when it was held at the NHRA Gator Nationals.

The trucks used for the Syclone Challenge bear an interesting history due to they were not actually 1991 production trucks. Instead, GMC used prototype / pilot conversion trucks that were VIN’d as standard Sonoma trucks. It is said that 4 trucks where used for the Challenge races. While it has still yet to be full confirmed by documentation, we are aware of the location of two of the reported four trucks. According to Don Stringfellow, driver of the famed world record LSR Syclone,  one of the Challenge trucks was hit during an event setup. The other vehicle involved in the accident was one of the LSR Syclones. Stringfellow noted that the damage was significant enough that both trucks were taken back to GM and disassembled. The Challenge truck was said to be scrapped while the LSR chassis was repurposed and used to build the NHRA exhibition Super Coupe drag truck.  In 2009, GM declared Chapter 11 bankruptcy and in doing so they liquidated some of their collection of vehicles through auction. This included the PPG Syclone and one of the Syclone Challenge trucks. Today, GM still retains ownership of one of the trucks which is located at their Heritage Center, while the other is privately owned (purchased through auction) and located in AZ. At this time is is unknown of the existence of a 3rd truck.

One of the Challenge trucks used was a prototype (#20) marketing truck. This particular truck was used for GM display promotion during events and to showcase the Syclone. It also was the the truck that was to be available at any time for news and magazine coverage (test drives and performance reviews). At first glance, #20 looks to be a standard conversion with correct Syclone appearance but closer inspection to the truck’s details shows subtle differences from that of the actual 1991 production. This is also the truck that GM decided to auction during their Chapter 11 bankruptcy and was sold.

The first notable feature is the truck is painted in an Aspen White / Gray combination. This was not an available color option for the production trucks, yet was planned for the 1992 production run which never transpired. The best indication of the aftermarket paint is seen on the firewall which retains the truck’s original black paint job. The truck has production rims with Firehawk SVX tires and electric sideview mirrors are in place which also was a planned 1992 update feature for the Syclone. There is a vinyl decal of the number “20” located in the lower passenger corner of the windshield. 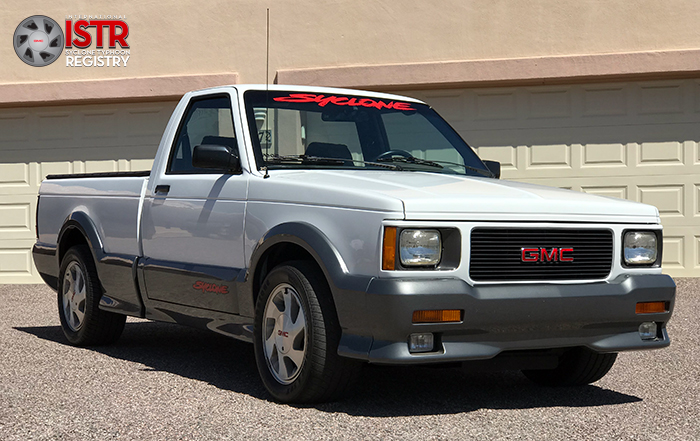 Moving to the interior, #20 has the “X” style steering wheel as found in the 92 Sonoma GT and the 92/93 Typhoon. Looking beyond the steering wheel, the familiar production gauge cluster seems to be of the same style of the production unit with one small outstanding feature – the MPH indicator. Unlike the production gauge cluster which tops out at 120mph, the Syclone Challenge truck mph indicator reads up to 140mph. The seats appear factory, although tilting the seats forwards reveals the backside upper portion has a carpet backing stitched into it. It is unclear why this was done and assumed that this was part of the original seat cover. The window switch is not the same as the 91-93 SyTy production. The truck does have the SyTy specific center console and shifter however close inspection one can see that the console has a different texture and feel as the production trucks and is visibly a different shade of gray with scuffs and scrap marks all over which make us assume that this was an early test part. The clear shifter gear position indicator font used for the P N D OD 1 2 letters slightly differs and is not as compressed as the production print. The glovebox door Syclone emblem is clearly an early test piece as it’s not refined and cheaply made appearance does not match the finished production emblems. At some point, Don Prudhomme left his mark of history with his signature penned on the outside of the glove box door. Opening the glove box door reveals a paper PAS decal stuck on the lower left of the door opening. Written in black permanent marker across the RPO decal is “MKT TRUCK NO. 20”. The VIN decal that is located on the inside door opening on the driver side is not the standard PAS decal and appears to be smaller in size and in different font. There is a “20” written in white on the frontside of the rearview mirror. 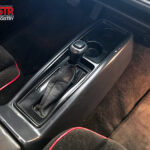 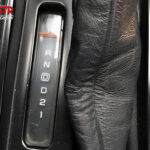 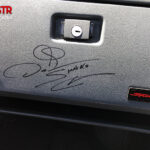 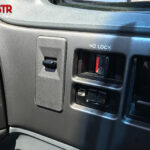 The underside of the truck is that of the standard 4×4 Sonoma chassis. There are safety loops in place around the forward propshaft and rear driveshaft. This would be for meeting safety regulations as required by NHRA for the trucks to be used on the track for the Challenge races. The appearance of the engine seems that of the production truck with no outwardly visible differences. 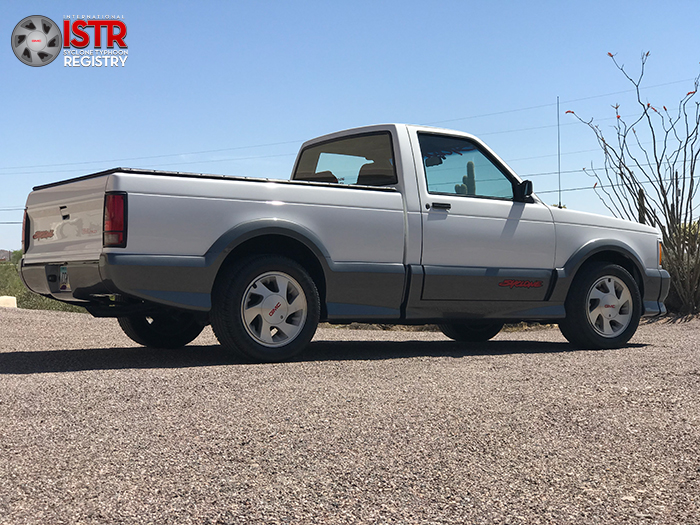 While #20’s story may seem to have finished once the challenge promotion was done and the end of Syclone’s production, it would find itself once again used for marketing many years later…only this time, not for GM. In 2017, the truck was used for 3D scanning and data input to be digitized and rendered into one of the most popular automotive series based games, Forza. 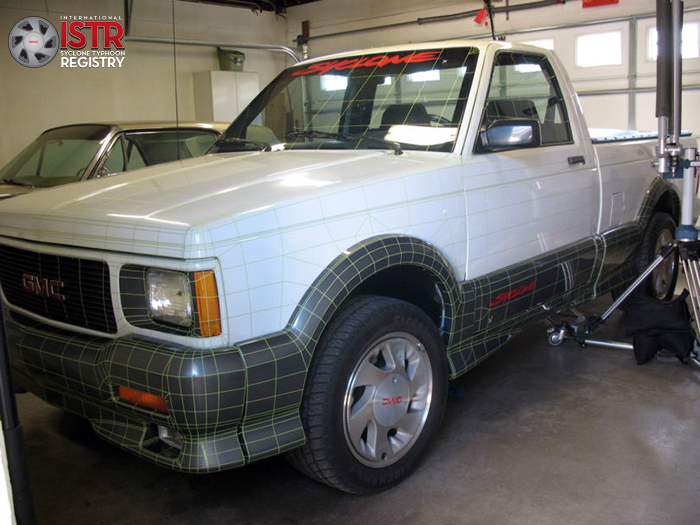 The Syclone Challenge Truck being scanned in for the Forza Series game. 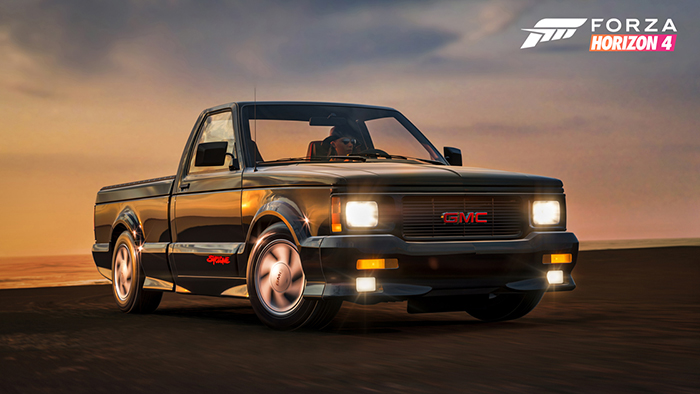 The Syclone can be found in Forza Horizon 3 and 4 as well as Forza Motorsport 4, 5 and 6. Of course, in typical fashion of the trucks, you cant feature one truck without the other. The Typhoon is able to be found in the November Speed Pack for Forza Motorsport 4 and in Forza Horizon 4. Even 30 years have passed since the end of Syclone’s production, the chance to own, modify and race one of your own is just a few clicks away on your gaming console.